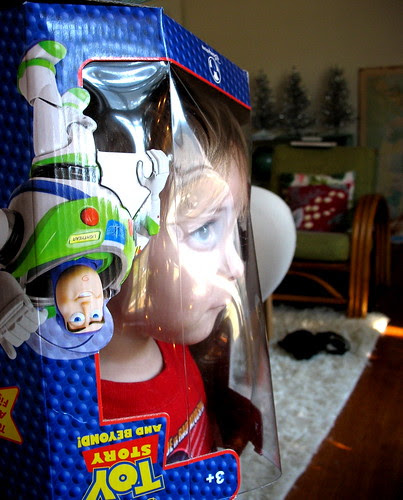 I caught them fighting over cardboard boxes yesterday. the bodies of the toys aren't even cold yet and they've turned to the boxes. oh yes, it was a scene christmas morning-- a tightly-wound ezra ripping into the box that held THE buzz lightyear doll-- something like high-pitched squealing and some frantic jumping and wide-eyed adoration over the highly-anticipated arrival of buzz. oh buzz. poor buzz. he was hot for about 72 hours but now lays prostrate in the corner of ezra's room. we occasionally hear him proclaim I AM BUZZ LIGHTYEAR I COME IN PEACE and it's like he's talking to himself. like he's trying to convince himself that he's as important as he ever was.

once ezra discovered that the box could be worn on his head like so, that was it. the box went with us everywhere. he wore it in the car, fell asleep while wearing it, tried to take on entire imaginary armies with it on. and once, while I was driving, I pulled it off his sweaty, sleeping head and put it on myself. I wanted to see what the big deal was. I'll tell you, I kind of liked it. or maybe I just liked the way other drivers reacted, I don't know.

though the interest in the buzz lightyear box has slightly waned, the desire for cardboard has not. two days after christmas, ava and ezra almost threw down over a flimsy strip of cardboard. it wasn't even a box (a good box is sometimes worth fighting for)-- it was a long, skinny piece of cardboard bent accordian-style. they both desperately wanted it and were ready to shed blood for it. and the words came flying out of my mouth before I could even think about what I was saying: ALL THOSE TOYS AND THIS IS WHAT YOU PLAY WITH? I'M CALLING SANTA! I'M SERIOUS! I'LL CALL HIM UP RIGHT NOW AND HE'LL COME AND TAKE ALL THESE TOYS AWAY! OH YES HE WILL! no, I'm not proud of myself but it was the voice of an exhausted, frazzled mother. the one who spent hours obsessing over the ramifications of so much barbie in her daughter's life, the one who went to four different targets to find the froggy rainboots for her son. she is the one who stayed up all night painting and decorating a small suitcase, filling it with supplies to make a special writing kit for her daughter. she is also the one who stayed up all christmas eve night to wrap presents and fill stockings and make sure that everything looked like it had been touched with the magic of santa claus (all in the fine details, you know). the words came flying out and I couldn't help myself. sounding like so many mothers before me and so many more to come, I know. and now I think I will run for Martyr of the Year because I am sure to win.

I'm over it now, I think. that is to say, I didn't lose it when the fighting over the boxes hit new heights yesterday. at least we've moved on from strips of cardboard to boxes, I thought. actually, I'm a little proud of the creativity behind the construction of ava's makeshift playhouse. I think maybe it's at the end of the day (that magic hour, you know the one-- from 5 to 6 o'clock) when they're both screaming over the boxes that gets to me. out of the corner of my eye, I spy (the now powerless) buzz lying in the corner. I know the contents of ava's new writing kit are strewn all over her bedroom floor and the barbies have been set up in the same position at the barbie totally real house (so TOTALLY real) for three days now. the fact that barbie's doorbell really rings, that the toilet makes a real live flushing sound, that the washer and dryer really spin-- the novelty of all that has completely worn off. ava has abandoned them to live in a box in the hallway with nothing but a lantern, her two teddy bears and her wits. the scenario is complete only when ezra beats on the outside of the box with little fists of fury and wants in. ava screams and I am called to duty. totally baffled, I shake my head in disbelief. and then I remember how much fun I had taking my mom's maxi pads and making them into twin-sized beds for my barbies. no toy in the history of the world can compete with the childhood joy experienced when making something from nothing. thus, the allure of the cardboard. how could I have forgotten that?

I suppose I should enjoy this stage. before the onslaught of video games and all things electronic. long live the cardboard, I say. long live cardboard. I've made my peace with it and am ready to get on with my life already.
at 9:57 AM