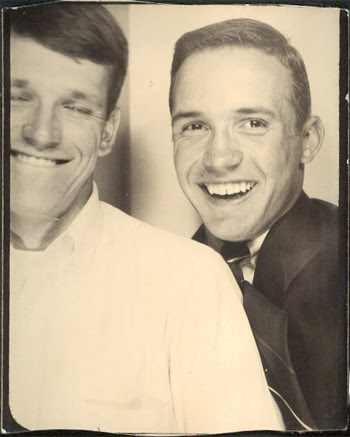 my dad (on the right) and his college pal rowdy, milwaukee, 1966

I can't tell the story like my dad. I'm not even going to try. he's the one you want sitting at your dinner table on a friday night. really-- get him going and it's better than what's playing at the local cineplex. I swear. and cheaper, too.

the particulars: one traveling college baseball team and the fine city of milwaukee. a snowed-out double header and a double breasted suit in midnight blue. the song 'hold on' by sam and dave had just come out and the guys, they were so happy. happy that they didn't have to play that double header, thrilled to death that they had the weekend all to themselves. there were nightclubs and I'm going to go out on a limb here and say that there were also pretty girls. of course, the double-breasted suit (in midnight blue) was worn. he doesn't remember the photobooth so much as he remembers the weekend. I love to hear him talk about it.

lucky for me, one frame survived. look at my dad, just look at him.