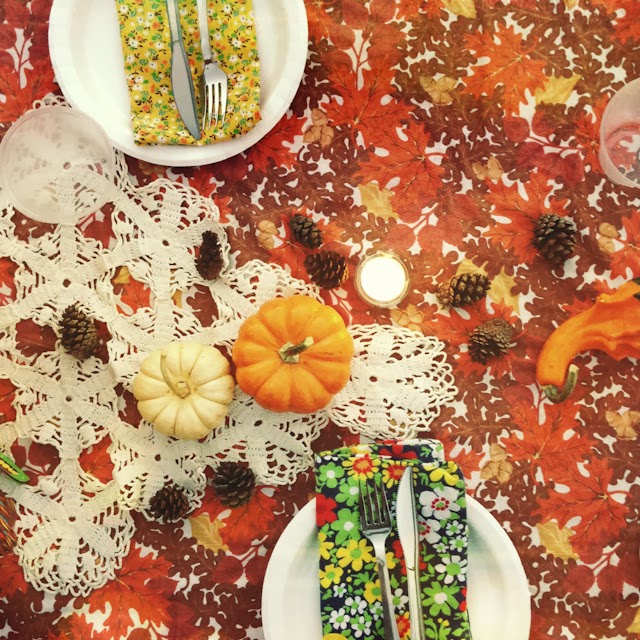 am now home from yurtsgiving 2013. am tired but happy and my hair smells like smoky campfire deliciousness. am happy to report copious amounts of mashed potatoes were consumed (as was a piece of joy's sour apple pie). I remembered my coat but did not need it. surprise of all surprises, the sun came out and we all ran around willy nilly, coatless. well, until the sun went down. thankfully, we did not forget the jiffy pop or the stevie wonder record. the twinkly lights did not make it. next time, maybe. I did not get that late afternoon walk in but I did stare wide-eyed at starry, starry night skies. I could not get over all the stars, I just could not. and I thought about my mom so much. she would have been so proud of our humble little thanksgiving picnic table. she probably would not have understood a thanksgiving yurt camping trip but she would have loved that table. and she would have loved hearing all the stories. and I would have loved telling her.
at 2:28 AM 1 comments

if you're reading this

it means I'm crossing number four off the list. I'm hunkered down in a yurt somewhere, with no internet access. and miraculously, had the foresight to schedule this to post. because I am winning at nablopomo, I tell you. winning.

come thursday night, I hope I am looking up at a wide open sky full of stars. that I am full of mashed potatoes. I hope I got a piece of joy's sour apple pie before it got snatched up and I hope I remembered my coat. I hope we remembered the jiffy pop and the stevie wonder record and the twinkly lights. I hope that I didn't talk myself out of a late afternoon walk. because I am really, really going to need that walk. I hope the kids are having the best time, the kind they'll talk about for decades to come. I hope I am feeling my mom all around me. I hope I am comforted by that. I hope I hope I hope.

today, I am thankful for mashed potatoes. and little flowers. and about a hundred thousand other things.

sunday, august the 4th: fleamarket sky (my kind of sky), jenny (with one heck of a vintage dress), alix (with one heck of a vintage pennant), a few lamps I wanted to take home (but didn't), jenny! at the alameda flea! also, fleamarket donuts! followed by a barbeque at greg and alix's house featuring: jenny's pretty salad, alix's sweet drinks,  wolfie/henry/ezra (plus one iphone) and mah girls. not pictured: the rest of the crew (aka greg, ward, ava) plus mildly sunburnt skin, piles of really really good things. (really really good things= stellar fleamarket scores).

back story: jenny. after all these years, jenny. whom I've been following online since 2005 and then somewhere along the way, we became friends. then she introduced me to alix and dang it if I didn't love her too. 2013 will be our year, jenny told me. just you wait and see. 2013 is when we will meet. and dang it if that's not how it played out. one whirlwind road trip to oakland and there we all were. and it was so good I can barely even stand to talk about it. so good I wanted to cry.

Labels: big adventures, HEY IT'S SUMMER, I heart road trips, internet friends are awesome, nablopomo, naphopomo, san francisco, sundays, t is for travel, v is for vintage, with the nikon

celebrated mister wardomatic's birthday today with the spreading of a little bit of confetti downtown portland. because you only turn forty-five once. and a little confetti never hurt anyone.
at 2:05 AM 6 comments

Labels: birthdays are important, little adventures, nablopomo, naphopomo, portland, that guy I love, with the iphone

as it turns out, I have finite amounts of optimism. it has not always been this way. in my younger years, the optimism was overflowing, limitless in supply. but now, each day provides me with a specific amount and when it runs out, that's it. everything starts to look a little differently around eight p.m., every idea, every project, everything in life, in the world. everything takes a hit. I used to fight it, used to push back with epic force until I realized the best thing I could do was to give in. let it wash over me like sleep. come morning, a fresh supply is waiting. I'm ready to take on the world again and everything in life looks a little brighter. everything (well, almost everything) seems possible.
at 2:43 AM

Labels: 70 things, art is my hustle, creative process, film is not dead, nablopomo, naphopomo, with the iphone

sunday, july the 7th: sunday shift at lodekka (folks, it gets hot on that bus in july)

sunday, july the 21st: homemade marionberry cobbler (first one!) plus ezra, ava and the moon

Labels: everyday, HEY IT'S SUMMER, mamahood, nablopomo, naphopomo, sundays, that ava, that ezra, with the nikon

today, on the greyest of days, the deepest and darkest, most blustery of days, when the sky turned dark around 4:30, I wanted to climb inside this photograph. and live for just a little bit.
at 2:17 AM 8 comments

Labels: color, HEY IT'S SUMMER, I heart road trips, little adventures, nablopomo, naphopomo, t is for travel, things that are good, with the nikon

"at a time when staged narratives and rendered images are popular, I am excited by the fact that life itself offers situations far more strange and beautiful than anything I could set up. "

(a few parisian street shots that mean a little something to me)
at 2:56 AM 12 comments

I am totally nailing this nablopomo thing.

back story: end of june found us in san francisco for the teaching of my instant noun workshop and a little house-sitting for bob and jen in butchertown. spent the last of what was left in our sad little bank account on gas to get there and back. totally worth it. totally.

(if you're ever looking for a place to stay in san francisco, bob and jen have the best little room up for grabs on airbnb-- check it)
at 2:01 AM 10 comments

Labels: big adventures, HEY IT'S SUMMER, I heart road trips, internet friends are awesome, mamahood, nablopomo, naphopomo, san francisco, sundays, t is for travel, that ava, that ezra, that guy I love, with the nikon

borrowed from my friend shari, who had the brilliant idea of documenting a week in this particular way:

seen:  bits of yellow in my hood, a mountain of clean laundry to fold, leaves scattered like starfish on the sidewalk

heard: the playing of records, the howling of wind, too many beard jokes

felt: the weight of the yashica-d in my hands, the sinking of my body into the beautiful abyss that is The Big Green Couch

if you believe in instant film

this is a photograph of ava, taken the day before she turned thirteen.

this is a photograph of a man named ray, taken as a train was passing in cairo, illinois.

this is a photograph of ava and ezra, at the edge of the columbia river in astoria, oregon.

each one of these was taken with a polaroid pack film land camera using the incomparable fuji FP-3000b film. which, sadly, fuji has decided to discontinue. this is no bueno, folks. no bueno at all. this is the film I took with me to kosovo, the film I used in my workshops, it's what I used to take portraits of the high school kids I met there, portraits I left with them to thank them for the time we spent together. this is the film I use in my middle school instant photography classes, the film they shoot with, the film they ooh and aah over as they peel those images apart. this film is a staple. it's the red beans and rice of the instant photography world. and so I won't let it go without a fight.

if you have a minute, please sign this petition to save fuji FP-3000b film. what will a petition do? I don't know. nothing, maybe. but it's something. there has to be something.
at 2:41 AM 8 comments