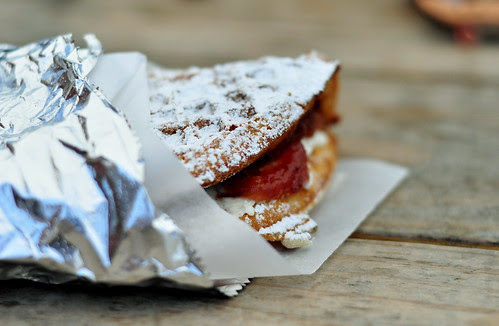 back in may, melissa and her crew of very cute people helped me cross number 14 off the list. which was to consume waffles from a favorite local food cart called the flavour spot. warm waffles folded in half and stuffed with things like sweet cream and jam. waffles meant to be eaten like tacos. madness, I tell you. mad. ness. 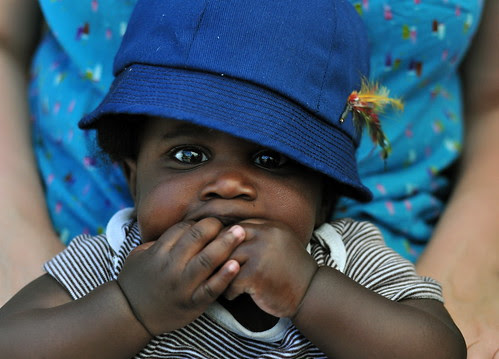 but sweeter than sweet cream and jam waffles sprinkled with powdered sugar? yup. lil manny with the blue hat. because that feather is sort of killing me. furthermore, that face has me considering procreation.
at 10:57 PM 14 comments

for the next ten days, I shall be writing nonstop about a certain list and all the items I've crossed off. plus maybe some I haven't. apparently, I like to cram everything in at the last minute. everything and all at once.
at 1:41 PM 9 comments 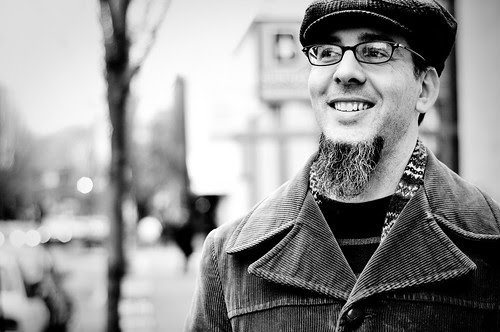 Labels: birthdays are important, everyday, nablopomo, that guy I love, with the nikon 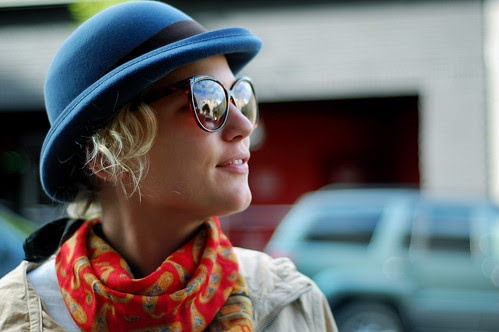 joan from chicago was the last stranger I photographed before I flaked out. see, I thought the project would get easier with time. it has not. the truth is that it got harder and harder until I just couldn't do it anymore. yeah, I bailed. I don't know what happened but a different kind of fear took hold and that's when I ran for the proverbial hills. which is funny since fear was the impetus for the project in the first place. 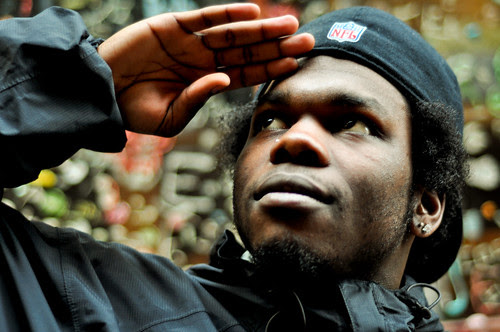 it was seven months before I was able to talk myself off the ledge. we were downtown seattle way back in february when things started to change. the lighting was all wrong and the timing was strange but I saw this teenager and all I could think about was how much I wanted to photograph him. and that's what I did. I walked up to him, told him what I was doing and that was that. I have no idea where the courage came from. I think maybe I was just tired of being afraid. exhausted, actually. it's exhausting work, fear. it will run you ragged if you let it. 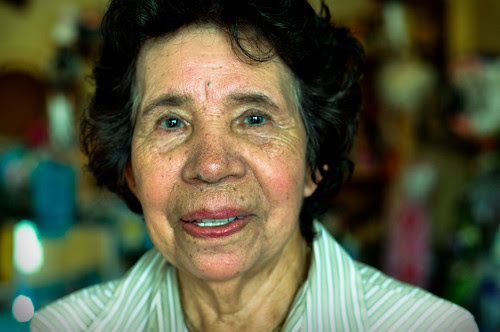 so I eased my way back into the project slowly. a few weeks later, I found myself in a tiny thrift shop in south texas. which is where I met stranger #17. 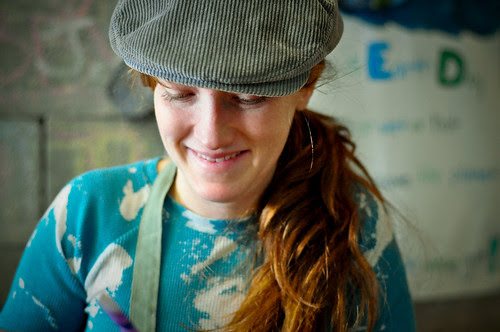 and then a few weeks later, st. louis and stranger #18. 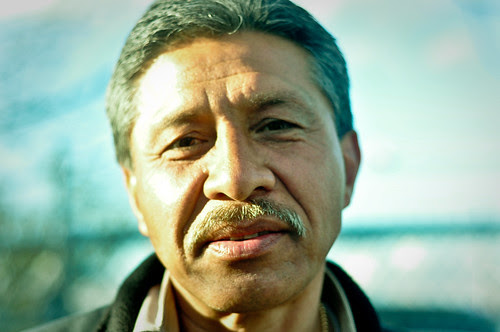 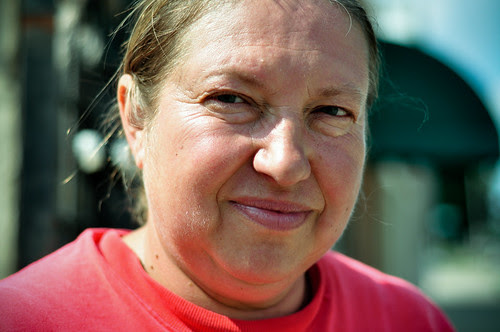 in august, I photographed stranger #20. the famous olga from illinois. olga of olga's house of stuff. 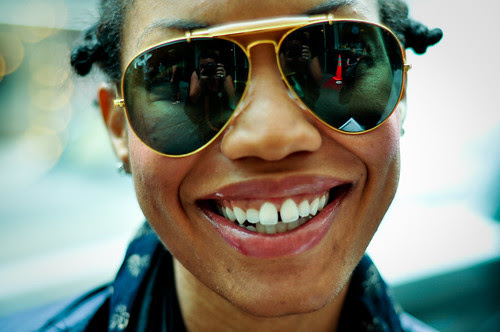 and most recently, new york city and stranger #21. better known as sevare, the girl with the electric smile.

at this pace, it will take me years cross number 25 off the list. but that's okay. because I'm not really in any major rush, not anymore. I just want to crack things open a little. even if it takes a couple of years. even if it takes forever.
at 2:13 PM 26 comments 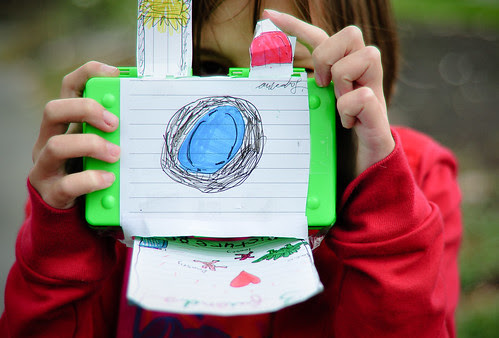 the best thing about today (and tomorrow and the day after that and probably forever) is ava's homemade polaroid camera. 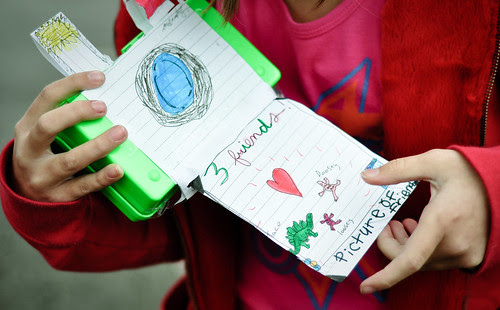 Labels: color, everyday, magical thinking, mamahood, nablopomo, that ava, things that are good, things we make, with the nikon 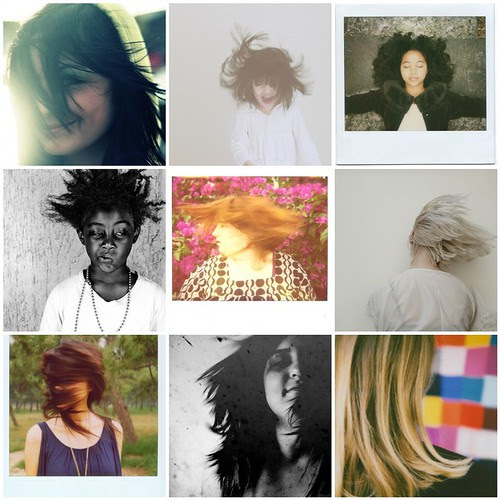 obsessed with images of hair these days. more specifically, hair in motion. and while we're on the subject, I'm totally ready to change my own hair. I am not to be trusted around a pair of scissors. and the hair color aisle-- also dangerous. I think maybe I'm about to do something stupid. consider this a thinly veiled cry for help. 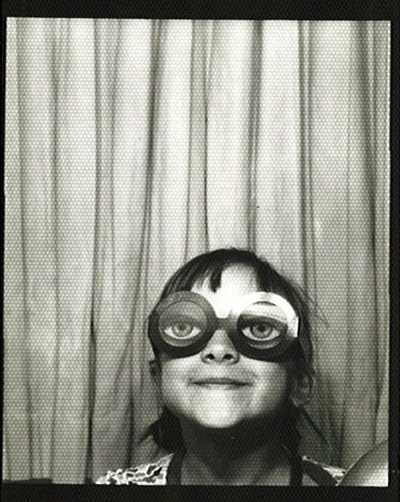 making me happy in a very photobooth friday sort of way today:

1. these super sweet photobooth frames from claire and elizabeth taylor

4. this homemade photobooth from inchmark

7. these amaaaazing photobooth portraits from square america and the henry ford collection

p.s. hello, santa? numbers 5 and 6 were specifically for you.

Labels: everyday, I am a girl who loves a list, inspiration, nablopomo, photobooth friday, projects, that ava, things that are good, viva la photobooth

number 36 off the list. well, sort of. I should probably explain.

on tuesdays, dance theater workshop asks their followers on twitter to 'tweet one physical movement (or nonmovement)'. the responses are then put together into one dance and filmed. people, this is brilliant. the very idea that these pieces are the direct result of an ongoing dialogue that takes place in the very strange online world that we all float around in is seriously brilliant. the idea that anyone, anywhere, anytime can intentionally contribute to these dances is nothing short of genius. collaboration via twitter. in this way, we are all choreographers. or can be, if we really want to. what I'm trying to say is that I'm in love.

when I put number 36 on the list I'll admit, I had something completely different in mind. but this is better, infinitely better. I had no idea what a rush it would be to see my one word performed in context with so many others. I love the idea that my word was plucked and thrown into a mess of words contributed by a bunch of people I don't know, that these words were then strung together and performed as one big gloriously athletic run-on sentence. I love it. me and the other 29 twitterers I do not know, we are the co-choreographers and collaborators of community choreography #16. my name is even listed in the credits. which makes number 36 official, so very official. for the record, my single action word was dangle. did you see dangle? good words contributed by others: explode, circumvent, rethink, simplify, flap, expunge, rest, convulse. see? good. so good. number 27 off the list and I can't help but feel that time is running out. in exactly one month, I will be 39. I wish I could say that I'm okay with turning 39. but I am not. I am also not okay with heights. actually, I'm horribly afraid of heights. which is sort of why I put number 27 on the list. but also, I love bridges. much as I fear heights, I am in love with bridges. yesterday, when the sun finally came out, I knew what had to be done. ward dropped the kids off at school and off we went. 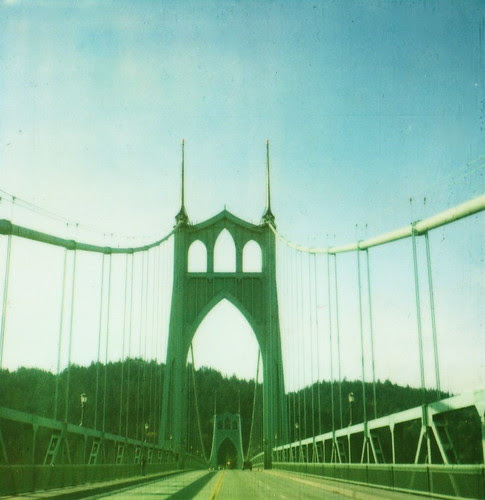 one foot in front of the other is how I did it. and handrails. the handrails helped. I will admit to gripping the handrails all the way there. well, and all the way back. I will also admit to screaming every single time a semi-truck whooshed past and caused the bridge to buckle. but I did step outside my own completely terrified state long enough to look down at the water, to ooh and aah over the city skyline and the spectacular structure that is the st. johns bridge. with the sun shining on my face and the wind whipping my hair, I crossed the st. johns bridge. and as terrified as I was, I would do it again. again and again.
at 2:36 AM 22 comments 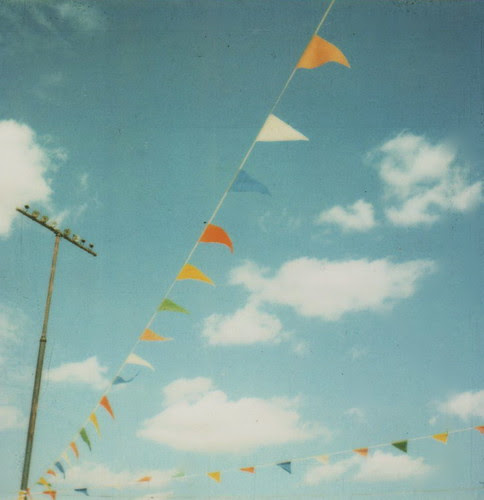 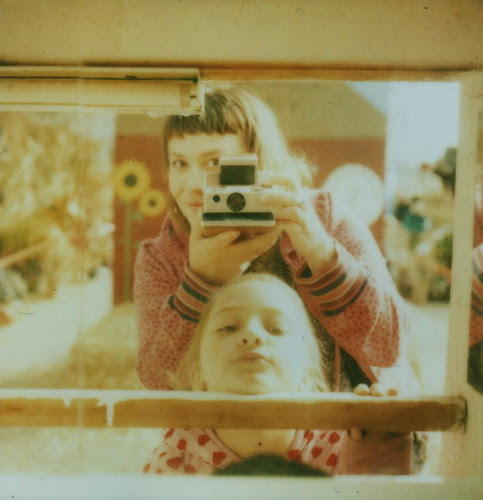 but I never have been one for loose ends so here I am with my final 'roid week offerings. and a sincere promise to hop right back on the nablopomo horse.
at 7:51 PM 9 comments

Labels: assignments, color, creative process, everyday, nablopomo, self, that ava, week of the 'roid, with the polaroid SX-70 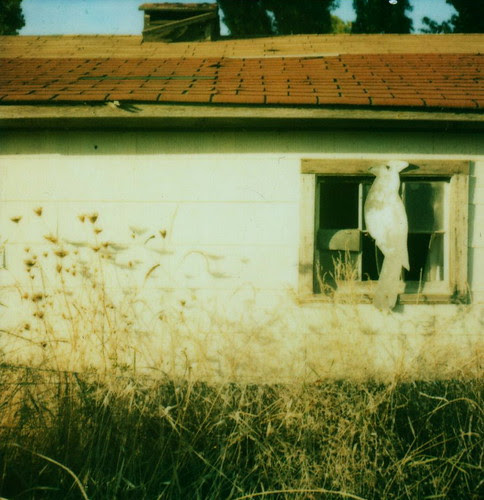 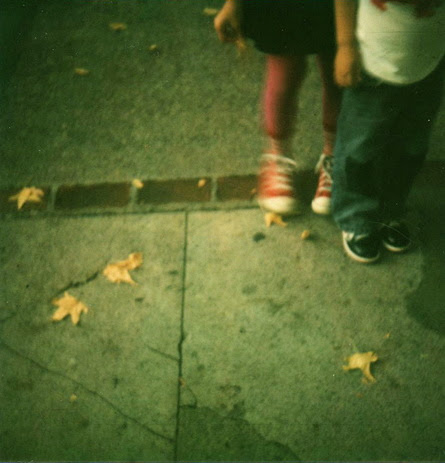 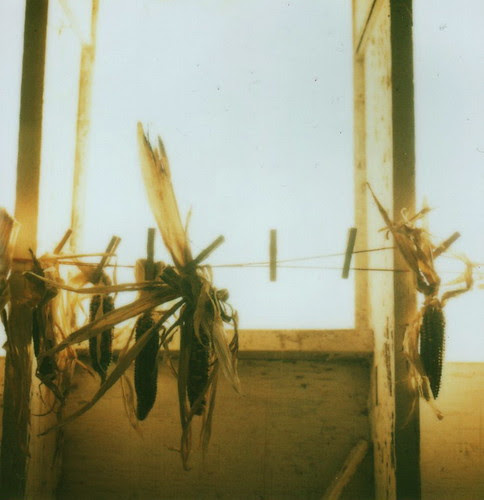 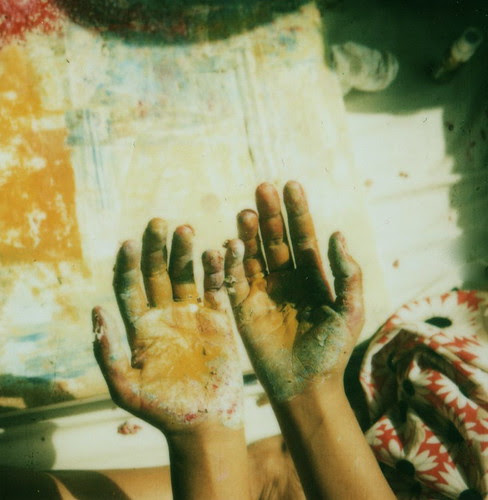 way back in august, I found myself in manzanita. right smack dab in the middle of another lovebomb. 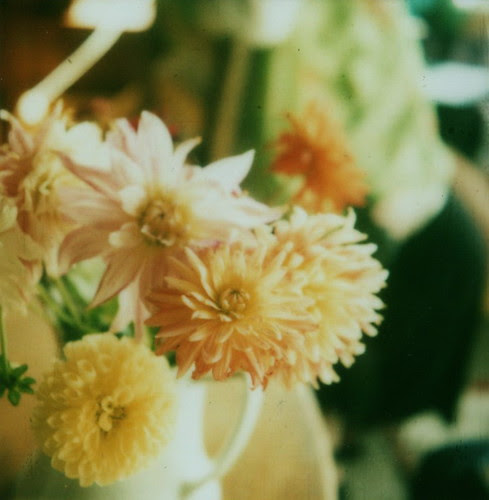 and because I was caught up in what can only be classified as The Craziest Summer Ever, I never really got the chance to share. after three weeks on the road, I found myself on another video shoot with my brother in oklahoma. two days after I returned home from tulsa, I left for manzanita. one day home from the lovebomb retreat, my pal leslie hit the scene. and then it was the first day of school for ava. and then the first day of kindergarten for ezra. and then it was our 15th wedding anniversary. and then it was squam. and then new york city. and and and. see how nutty it was? nutty, I tell you. I haven't stopped since july. until now. 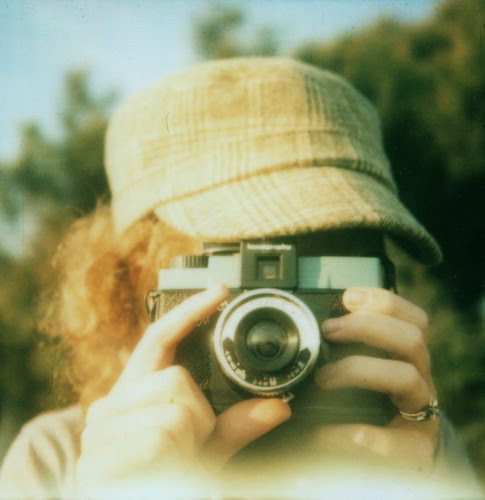 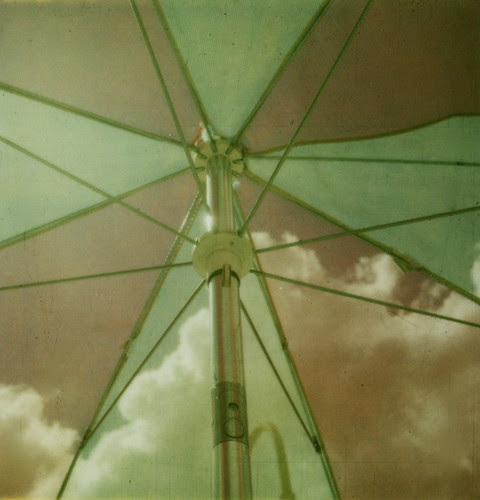 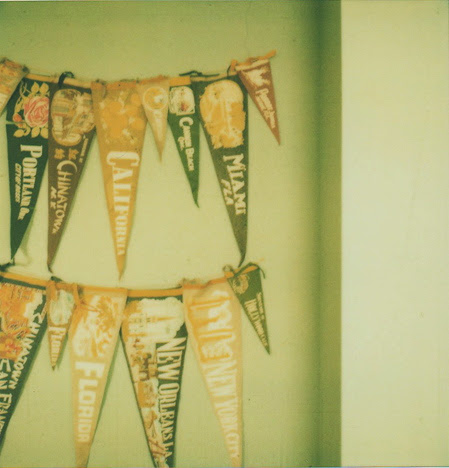 Labels: assignments, creative process, everyday, home, nablopomo, things I collect, v is for vintage, week of the 'roid, with the polaroid SX-70 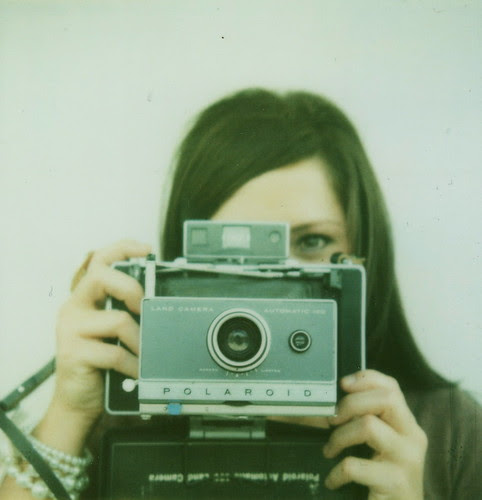 it's the week of the polaroid, friends. I do believe I've been ready for this for weeks now. I check the pool daily for inspiration because seriously, people do not play around when it comes to 'roid week. I mean, really. people throw down. and I love it.
at 12:44 AM 7 comments 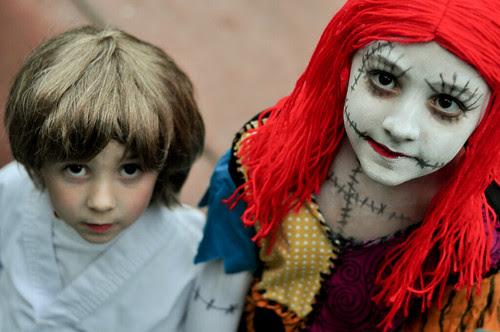 luke, of the skywalker variety and sally from the nightmare before christmas. sort of not kidding around with the costumes this year. the making of sally's dress nearly killed me and this is because I don't really sew. totally worth it, though. and luke wore the wig! I can't believe he wore the wig. 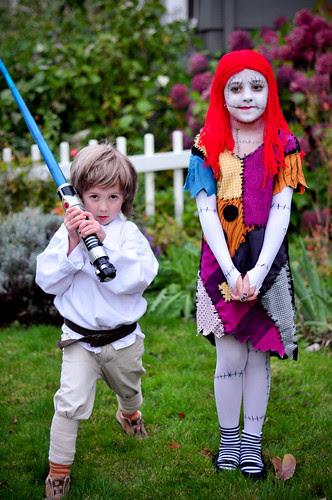