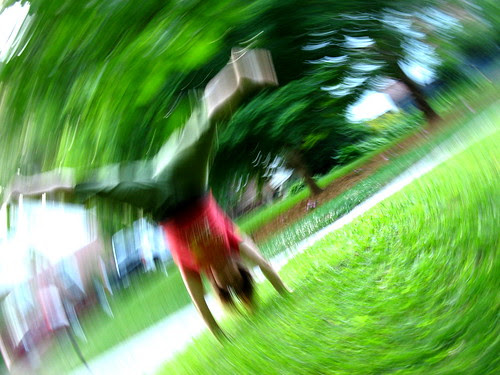 it was one of those ordinary evenings where everything kind of fell into place. I wasn't looking for perfection, it just kind of fell into my lap. and it wasn't that dreamy, seamless kind that you imagine goes on in the lives of all the people in the world who seem to have it all together (those people don't exist). it was a smaller, more ephemeral piece of flawlessness. really, it was just about 45 minutes of how you would like things to be all the time. and that's exactly how ward put it:

we were fresh home from loews, where the quest for playsand had been just tiresome enough to put the edge in my voice. we'd all just unloaded the sand and watched as it spilled quietly into the empty green turtle (a thrift store score, thanks to the k-girl). the sandbox had been sitting empty all week long, well on its way to becoming a home for wayward toys and ambitious insects. the addition of sand was like magic and beach toys were enthusiastically pulled from the attic and brought outside. ward and I watched as ava and ezra played together. ezra laid on his belly with fistfuls of sand and ava was busy with burying things. the sun felt warm and familiar and the breezes blew past just like you always wish they would. for a moment, everything was the way it should be. there was time to talk and lay back and look at things like the purple flowers growing in the neighbor's garden across the street. there was time to make lame jokes about whatever and let out long heavy sighs. and then (as if on cue) we heard the faint, tinny sound of carnival music. which could only mean one thing: an ice cream truck was somewhere in the area. since when did an ice cream truck make the rounds in our neighborhood? not that our street didn't call for things like frozen treats on wheels, we just hadn't ever seen one pass our way in the three years we'd lived here.

the look in ava's eyes was too much-- somewhere between wild disbelief and that of a million dollar lottery winner. poor ezra, he was confused. the excitement was palpable and I ran inside to grab my purse. the ice cream truck rounded the corner just then and I thought ava was going to come out of her skin. when it finally reached the house, I realized it was more like a van-- rundown with greasy windows and clowns in primary colors painted on the side. like one hundred summers had been chipping away at it. the music was no longer tinkling in that charming way from five minutes before but blaring now-- a little too brightly, a little too cheerfully, a little off key. had this whole scenario hit me on a different day, caught me in a bad mood, I would not have been so willing to let go of the words that were crossing my mind: words like 'creepy' and 'sad'. but I was not in that dark mood-- I was in the same place as ava and we were bouncy. I had recently read about a pink ice cream truck that drives up and down sunset boulevard selling ice cream treats and candies from all over the world (still dreaming about that one, jecca). our ice cream truck didn't look anything like that but you'd have thought it did, we were so giddy and googly-eyed. ava finally settled on a popsicle in the shape of a crayon. money changed hands and that was that.

as we stood in the yard coaching a sand-covered ezra on how to eat popsicles (hand on the stick, not the frozen part), I felt a very basic kind of happy. I was caught up in the moment, yes, but also happy because summer is practically here and I LOVE SUMMER. I cannot say it enough. I have been talking about it all week, I can't stop (I've written about it so many times and of course, one of many examples is here). I drive ward crazy each year around this time, always yapping about the coming of summer, about how summer will save me, just you wait and yeah, I'm a real summertime kind of girl and on and on I go. look, I know it's going to be hot. it's also going to be so uncomfortably humid that we are all going to feel like scraping the sweat off the backs of our necks with the junk mail that waits to be thrown away. we are all going to want to peel the clothes off our bodies every second we are not standing near the air-conditioner. I know that the mosquitoes will suck the fun out of everything (no pun intended) and that the excitement will surely wear thin. I know that it will eventually be too hot even to play at the park and we will all grow tired of the constant application of sunscreen, the ridiculous reports on the threat of the west nile virus. at some point, we will all start dreaming of weather that will warrant the wearing of tights and boots and sweaters and corduroy blazers, I know this.

but it's the promise of summer that gets me-- floaty, bright-colored cotton skirts and dresses that hang in my closet, toes that want to be painted in candy store colors of pink and red and peach, skin that wants to be submerged in the turquoise of the nearest swimming pool. the possibility of a road trip to the beach and fresh blueberries and drive-in movies, snow cones and saturday morning african dance classes at the rec center. in the yard with the popsicles dripping and the sand already everywhere and the purple flowers screaming to be noticed-- in that moment, I felt infinitely happy. with summer coming and cool green grass beneath my bare feet, I felt like turning cartwheels and so that's what I did. I turned cartwheels until everything around me was spinning and my wrists hurt. even if my summer is nothing like I dream it will be (it rarely is), I don't care-- I stand behind the blind adoration I have for the season, I do. all I need now is the flicker of the first lightening bug. in that moment of turning cartwheel after cartwheel, it was about possibility. it still is and will continue to be all summer long. sometimes that is better than the thing itself.

Labels: everyday, HEY IT'S SUMMER, mamahood, that ava, that ezra