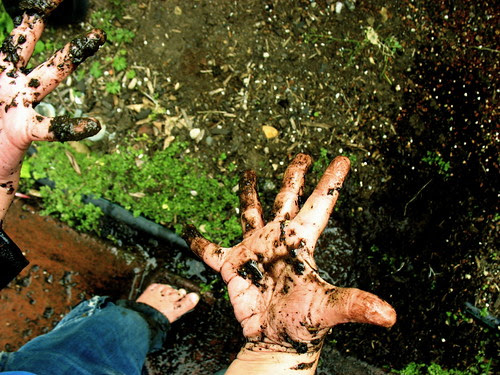 and you just know that these are ezra's hands.

and if we are talking about the earth today: did anyone else happen to see the lunar eclipse last night? ezra woke up at three in the morning with bad dreams and after I calmed him down and lulled him back to sleep, I heard something on the news about the lunar eclipse. I immediately shook poor ward awake and we ran outside together to see what we could see. there it was-- an eerily orange moon. all soft and glowy, it seemed to be floating just above the rooftops. I'm telling you, it was something to see. I love the idea that the earth was standing between the sun and the moon, casting a shadow on the moon.

I stood out there in my raggedy old nightgown with ward and I stared up at the sky. then ward brought ava down to see it too-- because you never know when you're going to get the chance to see something like this again. the three of us, we stood outside in the dark of the night and we stared up at the sky together. so clear, a thousand stars out and that strange, glowing orange moon.