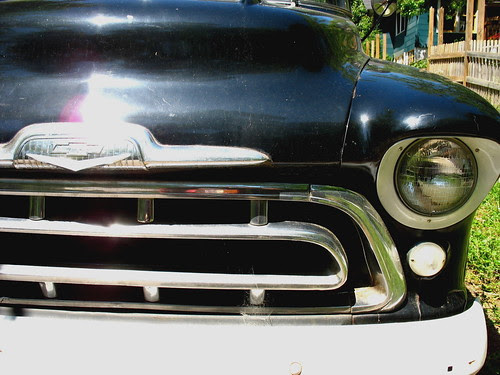 (for port2port's week of color)

the most interesting thing on the street was not this old truck, but the grey house with the lemon yellow steps that led to a shockingly bright orange door. I had to look twice, it was such a sweet surprise. like a neon sign that had been turned on in the middle of the day. like an ordinary business man in a crumpled grey suit wearing a tie the color of tangerines. too timid to get close enough to photograph the door, I shot the chevy instead.

I think about that orange door sometimes. it specifically came to mind when jeffrey yamaguchi put the idea out there to shoot the brightest thing you see during your week. I love the idea of noticing the brightest thing. although I think we naturally zero in on the brightest things around us (literally or metaphorically-speaking), we don't always really see them in the way they need to be seen.
at 12:17 PM