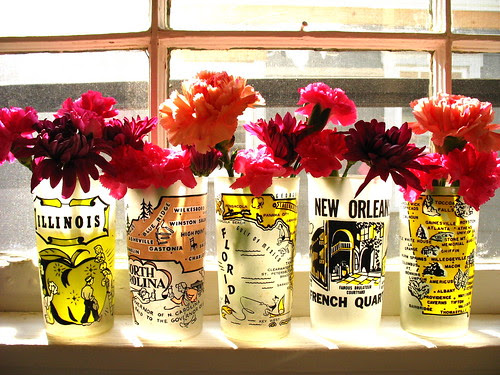 "put the broom down," he said.

agitated and sweaty, I let the broom drop.

"what? what? what are you doing? what's wrong?"

he had a strange look on his face, one I could not read. and then he got down on one knee.

"will you marry me?"

he was smiling now, laughing as he opened his hand to reveal the engagement ring I'd lost weeks before. my wedding band escaped tragedy but the engagement ring-- well, I thought it was lost forever. we turned the old house upside down but I quickly resigned myself to the loss. and so when he moved the couch and heard the delightful tinny sound of something small hitting the floor, he immediately investigated. not really believing that it would be the lost ring, the one that we picked out together at an antique store in rome, georgia so many years ago. white gold and circa 1940s, I have always been crazy about it. I must also confess that it was a replacement ring. yes yes yes, I lost the first one he gave me and I am still sick about it. ah, another long story and one of the great mysteries of the universe, really. absolutely amazing that this ring survived the move, even if it was just a short truck ride around the corner. that sunday, that big moving day-- also happened to be our 12th wedding anniversary. I knew there would be no night out, no tiny candlelit booth tucked away in the corner of some impossibly romantic italian restaurant, no time to reflect and really celebrate. but at least there was that moment. and the flowers he gave me which were lovingly placed in my favorite souvenir glasses in the window above the kitchen sink. they are happy there, I think.