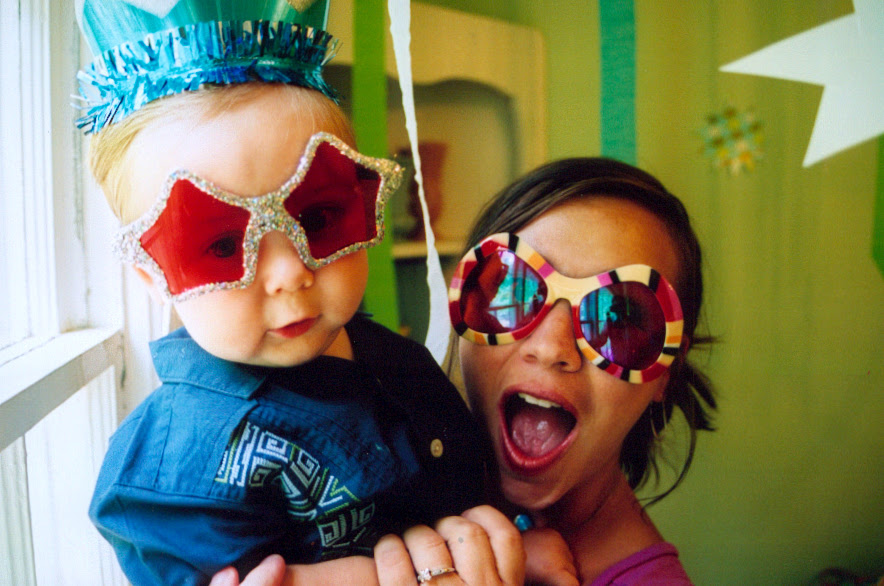 one of the many perks of motherhood: witnessing your baby turn one.

I always get a little nutty over the kids' birthdays. when I was six, I became obsessed with a book on childrens' parties and spent hours looking at all the pages devoted to games, favors, decorations and cakes. this (coupled with the fact that my mom always made a big deal out of our birthdays) may be why I get that crazy look in my eyes after I've brought home the goods from our local 'party city'. I truly love doing the party thing, but often bite off a little more than I can chew. like the time I promised ava a big under-the-sea party (complete with elaborate mermaid-shaped cake) after ezra had just been born. the cake alone, man. it needs to be seen to be BELIEVED. I must have been magically fueled by some wacko post-partum hormones. I thought I was going to cry when I cut into that mermaid cake, it had been such a labor of love.

there is only one 'first'... there is only one 'first'... this was the mantra repeated in my birthday-obsessed mind at three in the morning as I sat on the living room floor in a pile of wrapping paper and cut-out stars. earlier that evening (and by earlier, I mean one a.m.) as I was getting ready to bake the cake, I discovered that I was missing a beater. how could this have happened? where could it possibly be? then I vaguely recalled giving it to ezra one afternoon to play with (out of wild desperation, no doubt) and I remembered thinking that I was eventually going to need that thing and would be so mad at myself for not putting it back in its' rightful place. I was certainly right about that (and we will find that lonely little beater someday in some odd place and I'm sure I will have a nice little laugh). I set about mixing the cake by hand with the remaining beater (you better believe I yanked ward away from the computer to do the same, too) and I worked myself up into quite a little stirring frenzy, a sort of rapid full-body cake-mixing jig, if you will. I'll admit, I went a little nuts. but the mantra (there is only one 'first'... there is only one 'first') was beginning to take on a life of its own, common sense nowhere to be found.

of course, it was all worth it. a million times over, it's always worth it. watching ezra smile and grab at what seemed like thousands of streamers and stars that I climbed up and down the ladder to hang. watching his big brown eyes light up at the sight of the balloons, singing 'happy birthday' to him for the very first time, watching him stick his sweet little hand in the blue icing of the cake I had so much fun decorating, getting his first taste of that sticky, sugary loveliness. witnessing him squish the cake between his fingers and smear it all over his face... nothing quite like it, really.

happy first birthday, kid. we did it up right.

click here to witness more birthday love.
at 1:20 AM